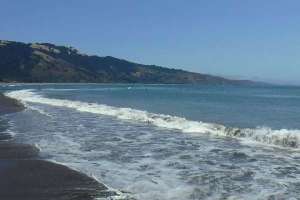 Bob Nelson, a longtime resident of Lagunitas, peacefully passed away in Sonoma after his fight with bladder cancer.  Born and raised in San Francisco to parents Robert E. Nelson II and Bette A. Nelson, Bob grew up in the house his grandfather built on Dewey Blvd and later would become a skilled carpenter and build houses himself.

An all-city champion in pole vaulting for two years at Lincoln High School in San Francisco, Bob graduated and moved to Marin in 1960 and became a legendary surfer on the shores of Bolinas and surrounding beaches - and even made his own surfboard!  Bob’s greatest times were spent with friends and family on the golf course and was a member and proud President of the Swing Hard Golf Club.  In 2012 he had the trip of a lifetime to play golf at Saint Andrews in Scotland with his son, brother and nephew and boasted about his ability to putt from 40 yards off the greens.

Bob is survived by his brother Gary R. Nelson and sister Arline B. Moore and precedes his younger brother Ronald Nelson.  Bob was the much loved father of Heather Nelson, Robin Nelson, and Robert E. Nelson IV, and Grandpa to five amazing grandchildren Leland and Avery Ammann, Svea and Oliver Baggeryd, and Wendell Nelson.  Bob will be most remembered for his immeasurable loyalty and love for his family, his generosity to all, and his warm smile that was forever hidden under his (proudly never trimmed!) signature mustache.

To send flowers to the family or plant a tree in memory of Robert E. Nelson III, please visit our floral store.